Understand your dog!
You have to get into the dog's mind and understand the instincts that have been evolving for hundreds of years.

Our programs are designed to be a pleasant learning experience for both the dog and the owner/handler.

You are guided each step of the way with instructions and demonstrations for each lesson.

You will not leave a lesson without knowing how to perform the exercise properly and what steps should be taken if a problem is encountered. 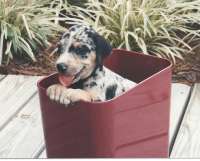 Training a dog can be as easy as ordering dinner, or as difficult as preparing one. Each dog is an individual and must be handled accordingly. In order for you to be effective in training your dog, you must understand his actions or body language, his thought process, and the instincts that have been developed within him.

The dog will make every attempt to please you, his pack leader, his master, just so that he may remain within your pack. Although some of his actions are described as annoying behavior, it is his way of trying to contribute to the pack, while maintaining his individuality. Dogs are creatures of habit or repetitive conditioning. They will, like most people, test you on occasion to determine whether you are a fair leader. You must display your leadership.

Training establishes that leadership position and aids the dog in learning the rules to be followed within his new pack. Knowing the rules enables them to function without the recourse of discipline, and once taught, they will attempt to follow them to the best of their ability. If you fail to establish yourself as a fair leader or set specific rules for the dog, then the dog will perceive you as weak and unworthy of leading the pack, and he will attempt to assume that position.

Acquiring the ability to read a dog's body language will tell you a lot about his intentions. The dog in turn learns your body language, mood, and vocal tones. He does not need instruction for him to accomplish this, as he simply observes you and learns. As a puppy in the litter, they begin reading the body language of the dam and their littermates, and they know what to expect and what is expected of them. They are aware of the sounds around them, and can quickly identify them.

An amazing number of individuals will attempt dog training without any prior knowledge of a dog's psyche, temperament, or breed specific attributes and/or flaws. Some are successful in their training, while others are not. They will make an effort at training, only to become frustrated with the dog, and when training has gone terribly wrong, they will abandon training, call a professional, or get rid of the dog. The successful ones are generally very lucky.